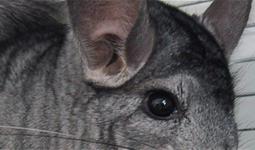 Chinchillas originally lived in the Andes mountains in South America!

Chinchillas are interesting animals! They look like combination of a hamster and a squirrel. And they can hop like rabbits! These unusual pets must have special care because of their thick fur and dietary needs.

If you pet a chinchilla, you will notice that it has very soft fur. One reason the fur feels soft is because it is very dense. That means the hairs grow very close together. Dense fur makes it hard for chinchillas to dry off if they get wet. So instead of water, chinchillas use dust to keep clean. During a “dust bath” the dust clings to oils and dirt. When the chinchilla shakes off the dust, the oils and dirt shake off too.

It is important to never get a chinchilla wet. Moisture can cause fungi to grow in the fur, and the chinchilla could get sick. It is also important not to let a chinchilla get too hot. Chinchillas can’t sweat, so they are at a greater risk for heat stroke. If a chinchilla’s ears turn red, that could mean it is too hot.

In the wild, chinchillas eat desert grasses. Because they are adapted to this diet, pet chinchillas may have trouble digesting fatty foods and high-protein treats. The moisture in fresh vegetables and fruits can also make chinchillas sick.

Many pet stores sell special chinchilla food. You could also give a chinchilla a few raisins or seeds.

Chinchillas also need lots of exercise. They are nocturnal, which means they will be most active at night. A healthy chinchilla can live as long as 22 years!

Watch a video of a chinchilla dust bath