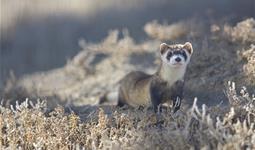 Ferrets belong to the family Mustelidae. This means that they are in the weasel family and are related to skunks, weasels and badgers. Ferrets have been domesticated for 2,500 years. Even though the exact origin is unknown, ferrets were used for hunting.

Ferrets are carnivores, which means they only eat meat. They can eat dry foods only if it is a high protein food. Ferrets have a fast metabolism. Metabolism is the process of getting energy from the food you eat. Having a fast metabolism requires ferrets to eat often, but they eat small portions.

Ferrets are smart animals. It is easy to teach them new tricks, which makes them fun pets.

These animals must be kept in a cage because they are curious animals. Ferrets enjoy to explore small places including dishwashers and under the oven. Ferrets will chew on wires and even your toys.

They also enjoy sleeping often. On average, a ferret will sleep 18 hours per day! This means that ferrets spend 75 percent of their day asleep.

Ferrets are easygoing pets, but they are illegal to own in certain cities and states. They are illegal in California, Hawaii, New York City and Washington D.C. Some people believe that they are a danger to other animals. Don’t worry! Ferrets are friendly critters.