If you like large mammals, look no further than blue whales. Not only are blue whales the largest living mammals, they are the largest animals on Earth! One blue whale is as long as three school buses end to end!

Blue whales live in every ocean in the world. The whales look blue underwater, but they are actually a bluish-grey color with light grey spots. Their bellies are a greenish-yellow because diatoms (pronounced die-uh-toms) cling to their bodies. Diatoms are a type of algae.

Blue whales also have slow heartbeats. Their hearts only beat nine times per minute. A blue whale's heart is the size of a car!

Blue whales eat four tons of krill every day. Krill are tiny water animals that look like shrimp.
Female blue whales give birth every two years. Their babies are called calves, and they are 23 feed long (about 7 meters) when they are born. Blue whales can live to be 100 years old. 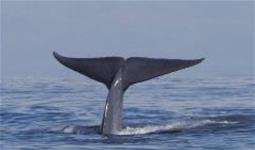 Blue whales have two blowholes that are similar to our nostrils. The blowholes connect to their lungs, and they can blow water 20 feet high!

Blue whales are often identified by their unique tail shapes.

Etruscan shrews are the smallest mammals in the world. These tiny mammals are small enough to fit in a teaspoon.

Etruscan shrews look like mice. They have brown fur and light grey bellies. Even though they may look like mice, they belong to the shrew family.

Unlike blue whales, shrews have extremely fast heartbeats. A shrew's heart beats over 1,000 times per minute!

These tiny creatures have a huge appetite because they have a fast metabolism. Metabolism is the process of getting energy from the food you eat. They can eat twice their body weight every day. Etruscan shrews like to eat insects and other small animals. They like to hunt their prey at night.

Etruscan shrews find their way around by using their sense of touch. They do not have good eyesight.

Etruscan shrews like to live alone in grassy areas. They mostly live in Mediterranean areas that are warm and wet.

They are territorial, and they make loud chirping noises when another animal is near.

Etruscan shrews can weigh less than two grams. That is as much as an American dime coin!

Baby Etruscan shrews are called cubs. Two to six cubs are born in each litter.