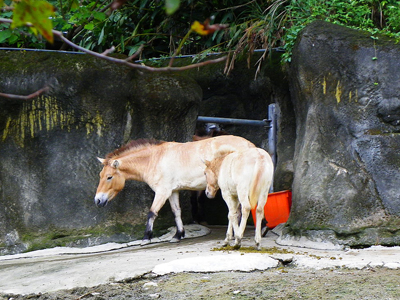 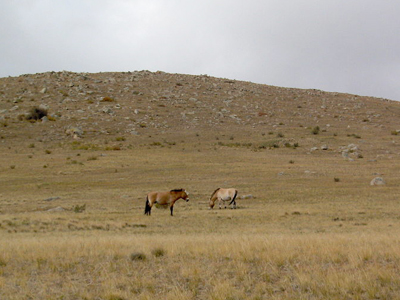 Przewalski's horses live in an ecosystem called a steppe.

Deep in the Mongolian wild lives a very strange horse. This small, brown horse is called Przewalski's horse. The name “Przewalski” is pronounced “sheh-VAL-skee.” The horse is very rare and its history is fascinating!

Przewalski's horses are named after a Russian man named Nikolai Przhevalsky. This man went on an expedition to find the horses in 1881. The horses were not easy to find because they lived in a harsh environment called in Mongolian steppe. A steppe is a dry area where only certain grasses can survive.

Przewalski's horses have shorter legs than domesticated horses. They also have manes that stick straight up, like mohawks! Their manes are usually dark brown, their backs are light brown and their bellies are cream-colored.

In the wild, Przewalski's horses live in groups with their families. A group might have two or three female horses and just one male horse. When young horses are two or three years old, they separate from the group to start their own families.

By 1977, there were only 12 Przewalski's horses left in the world. These horses were scattered between zoos, and no one was sure how to save them. Luckily, scientists discovered that by breeding certain horses, they could safely increase the population. It is dangerous to “inbreed” a population of animals. Inbreeding is when animals that are closely related, like siblings, produce young. Inbreeding animals is bad because the offspring may be unhealthy or unable to produce more young.

To avoiding inbreeding the Przewalski's horses, animal scientists decided to exchange the horses between zoos and breed them to new horses. By 1997, they had enough captive horses to release 16 into the wild in Mongolia. By 2005, there were about 1,500 Przewalski's horses in the world! Many of these horses live in family groups in zoos, where they can teach people about the importance of species conservation.