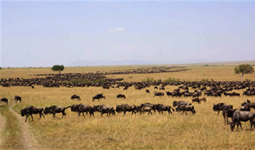 As spring approaches you may notice some birds returning to your neighborhood. These animals may be returning to their home from migration. For some people the return of birds signifies the return of spring, but it is not just birds that migrate. There are migratory mammals, fish, reptiles, amphibians and insects!

Migration is when animals will move from one place to another in response to weather, food supplies, day length or other factors. In most cases, but not always, animals will return to their original location when the weather warms or food becomes available. The triggers of migration are not completely understood so scientists are still studying why migration occurs when it does.

Scientists use many methods to study migration to better understand why it occurs and what paths the animals take. Techniques may include banding, satellite tracking or radio tracking. But there are more! Banding is when a scientist will catch a bird, identify it with a band around its leg and will release the bird. Satellite tracking works by satellites in a network picking up electronic signals from a transmitter on the animal. All the signals help identify where the animal is and the route they are taking. Radio tracking involves two devices. A transmitter on the animal sends out a signal, like a radio station. A receiver picks up the signal to find the animal, like your radio at home would pick up a radio station.

Animals travel long distances, short distances, or move nomadically. This means they can wander from place to place in search of food or other resources. Examples include zebras, wildebeests and bison. They may end up where they started or in a completely different location with the change of season. Migration will test an animal’s mental and physical strength. Apart from the physical effort of moving, animals can also experience a lack of food, bad weather and can be exposed to predation. To avoid these dangers animals may travel in groups. For example, Canada geese will travel in a large flock in “V” shaped groups.

Birds are most commonly associated with migration. Some species have yearly, large-scale movement between breeding homes in summer and their nonbreeding grounds in winter. More than half of North American breeding bird species are migratory. Birds migrate from areas of low or decreasing resources to areas of high or increasing resources. The most important resources for birds are food and nesting locations.

Other animals migrate too! Mammals such as caribou, bats, elk and whales travel to find food in winter or warmer water. Fish also migrate, swimming south or moving into deeper, warmer water. Some insects migrate by either moving further into the soil or longer distances. For example, Monarch butterflies migrate as far south as Mexico in winter and will spend summer in the Northern United States or Canada. Earthworms migrate downwards into the soil, some travelling 6 feet under ground!

So as the weather warms up, keep your eyes open for new visitors to your backyard!