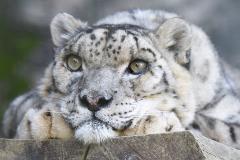 How big is a snow leopard?

A snow leopard weighs 59 to 121 pounds. That's about the same weight as a Golden Retriever. A snow leopard measures 30 to 60 inches from its head to the base of its tail. Its tail is an additional 31 to 39 inches long.

What do snow leopards eat? 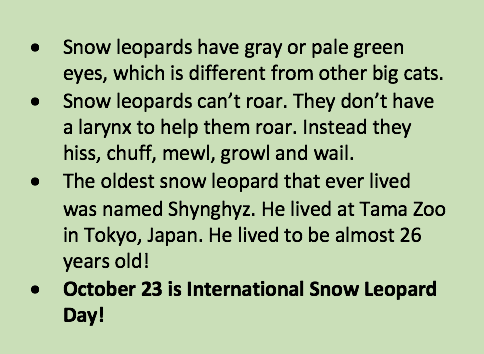 Snow leopards are omnivorous predators. That means they are meat eaters, but they also will eat plants. Snow leopards hunt animals ranging in size from small birds or mammals to animals as big as a camel or a horse!

Where do snow leopards live?

That's a lot of places!

How do snow leopards survive the cold? 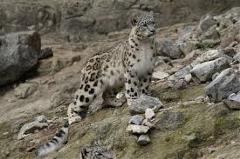 A snow leopard has a stocky bod with short legs and thick fur. It has short round ears and fur on the underside of its paws. All of these features help keep the snow leopard from losing body heat. A snow leopard has wide feed that act as snowshoes to keep it from sinking into the snow and to help it travel through rough terrain. A snow leopard's tail helps it keep its balance and also acts as a blanket with extra fur and fat to keep its face warm when it curls up to sleep. A snow leopard's head is relatively small with a short muzzle and domed forehead, but it has large nasal cavities (nose holes) to help it breathe at high altitudes.

Do snow leopards live in groups?

How many babies does a snow leopard have? 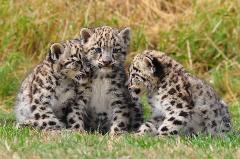 Snow leopards breed in the winter. A female is pregnant for 90 to 100 days. She gives birth to 1 to 5 cubs at a time.

How long do snow leopards live?

In the wild, snow leopards can live anywhere from 15 to 18 years. However, a snow leopard in captivity can live up to 25 years.