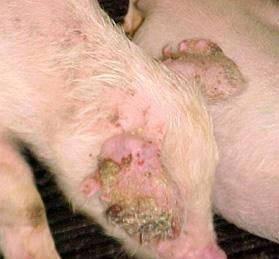 This pig has a staph infection on its ear. Antibiotics can treat this kind of infection and improve pig welfare. Photo from the Animal Science Image Gallery.

FAQ's about antibiotics in animal feed

Q: Why do livestock producers use antibiotics?

Antibiotics are useful for controlling and preventing disease in livestock. Proper use can keep animals healthy, control the spread of diseases between herds, help animals gain weight and prevent the spread of diseases from animals to humans. For example, a pig with a respiratory infection is treated with antibiotics. A veterinarian will prescribe an antibiotic to not only help the sick animal get better, but prevent other animals from becoming infected. Antibiotics are only prescribed when necessary. The use antibiotics can help prevent an infection from being fatal.

Q: Why are some antibiotics called "growth promotants?"

Since the 1940′s, scientific studies have shown that antibiotics may improve animal growth by improving gut health. Animals play host to many kinds of gut microbes. Though many gut microbes aid in digestion and immune response, they also compete with animals for nutrients.

A 1994 study showed that as much as six percent of the net energy in the pig diet is lost to organisms in the gut. Antibiotics in animal feed can reduce this competition and help an animal gain weight more efficiently. Low doses of antibiotics can also ward off "subclinical infections" that stress the animal's immune system and slow growth.

Use of growth-promoting antibiotics is one way livestock producers meet global demand for food. In 2002, Dr. Gary Cromwell, a professor of swine nutrition at the University of Kentucky, published a paper showing that antibiotics dramatically improved pig growth. Cromwell analyzed the results of more than 1,000 growth experiments in swine over a 25-year period. In young pigs, antibiotics improved the growth rate by an average of 16.4 percent.

Q: What is antibiotic resistance?

On Dec. 22, 2011 the FDA reported that after 34 years of hearings on the issue, there is still no direct link between antibiotics in animals and drug-resistant human diseases.

Despite the lack of direct evidence, several organizations have spoken out against the FDA decision. Many animal scientists blame this opposition on common misconceptions about antibiotic use. According to the American Meat Science Association and the North American Meat Institute, "One often-cited statistic comes from the Union of Concerned Scientists, which claims that 70 percent of antibiotics produced in the United States are fed to livestock, a statistic they cannot possibly calculate considering that antibiotic use in humans is not tracked.

Q: Do we treat animals with the same antibiotics as humans?

Q: Do I need to stop eating meat to prevent antibiotic resistance?

Prior to being processed, both livestock and poultry treated with antibiotic must go through a specific withdrawal period. This ensures the antibiotic is no longer in their system. It is still always important to make sure that all consumed meat has been cooked properly and thoroughly.

There is still no conclusive evidence that the use of antibiotics in food leads to antibiotic resistance in humans.