What are the different types of animal housing?

At different times in your life, you may have slept in a cradle, a crib, a bunk bed or a cot. You may have lived in a townhouse, a cottage, a college dorm or an apartment. Where you lived depended on where you were in your life. Were you a toddler or a bachelor? A student or a young married person?

Just like people, animals live in different places depending on their stage of life.

Read about some common farm animals and where they live as they mature:

When it is time for baby pigs (piglets) to be born, their mothers are moved to farrowing (gestation) crates. These individual pens have metal bars that separate the mother from the piglets when they are born. This allows the piglets to nurse from her, but prevents the mother from accidentally laying on the baby pigs and crushing them. Gestation crates also allow the farmer to better control the housing temperature. The separation allows the piglets to be in a warmer area and the mother in a colder area. Farrowing crate flooring also helps maintain a dry environment. This helps to prevent the spread of diseases. This is especially important as the piglets and mother are more susceptible.

Gestation crates are not only necessary to keep the piglets and mother safe, but also the farmer! Pregnant sows display very aggressive behavior that can lead to injury. By using gestation crates, farmers can assist during delivery, monitor the wellbeing of the young, and stay safe.

Piglets stay with their mother for about two to four weeks. After that, they are moved to a nursery. Here, they are kept warm and given special food to help them transition from their mother’s milk to the adult pig feed they will be eating later on.

The type of housing given to sheep depends on what kind of production system the farmer is using. In “farm flock” production systems, the farmer may allow his sheep access to pasture during the day and keep his sheep in a barn at night. During the winter, he may keep some sheep in the barn all day. These systems are usually found in the eastern part of the United States, where farms are smaller. In the western United States, “range flocks” are more common. These production systems often let sheep run free throughout the year, with the farmer moving with them as they graze. The sheep are less intensively managed than in farm flocks. The farmer has less control over his flock’s environment, but the sheep get more exercise and more time to graze.

The type of housing necessary for sheep also depends on what time of the year the baby sheep (lambs) are born. Because the producer has more contact with his sheep and more choice over where they are housed, this is more of an issue for farm flocks.

Usually, female sheep (ewes) are what farmers call short-day breeders, which means that it is easiest for them to get pregnant when the days are short, during fall and winter months. A ewe’s pregnancy lasts around 147 days, so lambs from ewes bred in the fall are born in the spring.

Housing requirements for beef cattle largely depends on season and age. As a result, many beef farms are either calf/cow or feeder, though some are a combination.

During the summer, beef cattle are able to graze on pasture due to the comfortable temperatures. In the winter, as the temperatures begin to drop and the wind starts to increases, beef cattle have access to the indoors. It is important to remember that cattle are built for these cold temperatures due to their thick skin and hide. As cattle mature, they are moved to what is known as a feedlot. In a feedlot cattle are able to roam in large fenced in areas. Feedlots allow for their to be free access to food and water.

Cattle who are calving (ready to give birth), weaning (ending the period in which they breastfeed the young), or sick cattle should have primarily indoor housing. These barns are built in such a way that the natural air flow helps increase ventilation. The continual air flow helps to keep the area comfortable and prevent and control possible disease causing pathogens.

Unlike most other farm animals in larger production systems, dairy cows tend to stay in one place for most of their lives.

When baby cows (calves) are born, they are separated from their mothers to prevent the spreading of diseases from cow to calf. They are fed colostrum from their mom as quickly as possible. Colostrum is the first milk from the cow, which has special antibodies to protect the calf from diseases. Calves are then fed milk replacer for six weeks in order to preserve their mother’s milk for human consumption.

The female calves (heifers) are placed in individual pens, such as hutches, or together in groups, where they are fed milk replacer, grain, water and hay. At about seven weeks, calves are weaned, taken off milk, they are moved into group housing with other dairy heifers. These heifers then grow and once they have a calf, they begin producing milk and move into a barn with other cows.

The male calves are either kept to grow into dairy bulls or sold to other farms to be raised for veal or beef.

Adult dairy cows are usually kept in large, open barns with free stalls, meaning that they have the freedom to walk around the barn at will. These stalls are bedded with straw, sand, wood shavings and other bedding materials that make it comfortable for the cow to lie down.

On some farms, dairy cows are allowed to graze periodically throughout the day and are also provided with feed and water when they return to the barn. At least twice a day, they are taken to the milking parlor, where their milk is collected and pumped into a large steel vat and held there until a milk truck takes it to be processed.

There are two types of domestically-kept chickens: broilers and layers. Broilers are chickens that are raised for meat. They may live in several different places before they are old enough to go to market.

On special breeding farms, fertilized eggs are laid by a breeding hen. These eggs are taken to a hatchery and stored for up to ten days before they are placed into incubators. These incubators keep the eggs at a temperature of 55–88° F before they hatch into chicks at 21 days.

After hatching, the chicks are taken to other farms where they will grow to market weight. When the chicks first arrive, farmers may choose to divide their long, ventilated chicken houses into smaller sections, as the chicks are still very small and may have trouble finding their feed and water in a large space. Farmers may use brooding rings (small, round pens) to keep the chicks close to the food, water and heaters necessary to keep them healthy and warm.

As the birds grow, the farmers will take the dividers down and let the chickens move around the entire barn. The chickens will be kept in this barn until they weigh about six pounds and are ready to go to market.

After they have hatched, laying hens are kept in cages until they are around 17 weeks old. They are then moved into a laying house where they begin laying eggs. On larger farms, laying houses are connected by a series of conveyor belts that transfer the eggs from each house to a central building. Here the eggs are refrigerated and either processed on the farm or transported to another facility for further processing. 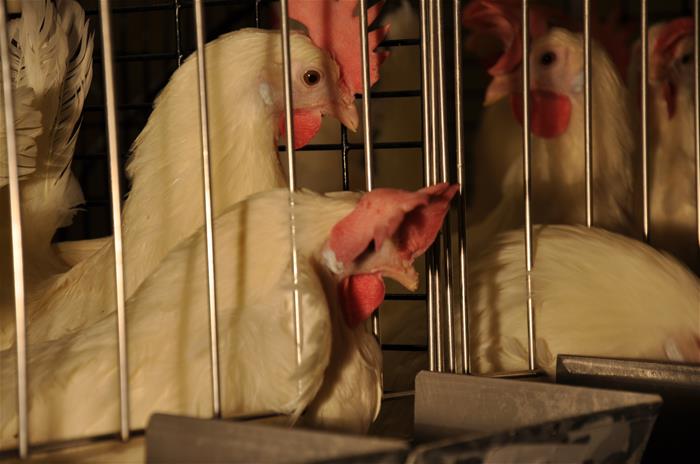 Farmers’ livelihoods depend on the health of their animals, so they do their best to keep them healthy and happy.

In order to keep their businesses going, farmers need to earn more money selling products from their animals than they spend taking care of them. When farmers have more animals, this is easier for them to do. But having more animals also makes it harder to find space for them all.

This is one of the most pressing issues for farmers and animal rights groups: providing enough space for each animal to live in, while still allowing the farmer to have enough animals to stay in business.

Below is a description of some animal housing that has come under scrutiny in recent years based on animal welfare concerns.  An attempt is made to address both side of each issue.

Gestation crates are small pens where female pigs (sows) are kept while they are pregnant. For a high-producing sow, this may be most of her life.

On larger farms, where many pigs are housed together, these crates are used to separate the sows in order to keep them from fighting and injuring each other. They also allow farmers to keep more pigs together, because each sow has her own designated section of the barn in which she must stay.  One big advantage of this is that the farmer can individually monitor how much each sow is eating and adjust the amount of feed she gets per day so that she is in proper body condition prior to farrowing.

Although these crates allow the farmer to be more productive, some people are concerned about whether it is healthy for the sows to be kept in such a small space. Scientists are trying to come up with a solution that will make the sows healthier while still keeping them safe and allowing the farmers earn money.

Laying hens are sometimes housed in cages called battery cages. These cages have sloped floors which allow the eggs to roll onto a conveyor belt. The eggs from battery cages tend to be cleaner and are more easily collected than eggs from hens that live on barn floors.

When kept together, chickens will fight each other in order to determine which one is in charge. This is called a pecking order.  Battery cages help to keep the hens from pecking each other and injuring themselves or another bird.

Some people are concerned about the welfare of the laying hens kept in cages. In the European Union, all battery cages have been banned. The trouble is that when battery cages are banned, egg prices go up because it becomes more expensive for the farmer to keep his chickens. Farmers, researchers and public policymakers are still working to find the best solution for the farmers, the consumers and the animals.

Instead of being housed in free stall barns, dairy cows are sometimes tethered, which means that they are put in stalls and tied there so that they cannot walk around the barn. Tethering has not been found to cause unnecessary stress to the cows, but researchers suggest that tethered cows be allowed daily access to an exercise barn, where they would be free to walk around for a period during the day.