Animal science is the study of animals that live alongside humans. Around the world, humans rely on animals for food, fiber, labor and companionship. Animal scientists help us understand and manage these animals. 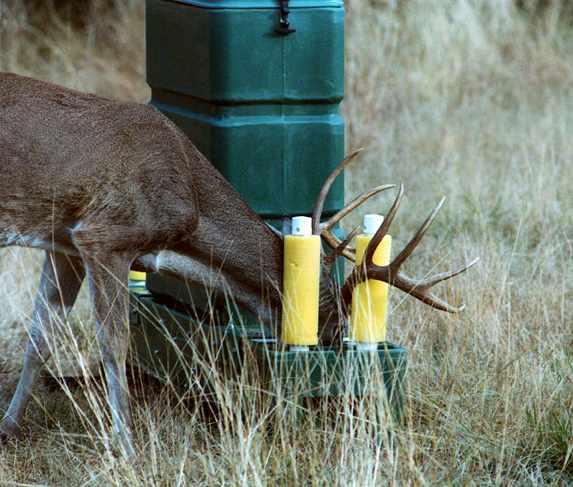 A white-tailed deer feeds from a station that applies pesticide to its neck.

Entomologist works to save cattle in Texas

A tick is a freaky little animal. Its sharp mouth parts are perfectly evolved for biting through thick skin. Its abdomen looks deflated—until that moment when it balloons full with a meal of blood.

But for cattle ranchers in Texas, ticks are more than cringe-worthy. Southern cattle ticks and fever ticks carry a disease commonly called “cattle fever,” and an infestation of ticks is enough to drive a ranch to bankruptcy.

“If they get infected, it can cost them the entire cattle herd,” said Dr. Mat Pound, a research entomologist with the USDA agricultural research station in Kerrville, Texas.

Since 1907, scientists and ranchers have worked together to eradicate ticks that cause cattle fever in the south-eastern U.S. In the 1940’s, after years of pesticide treatments and the establishment of a buffer area against the Mexico border, cattle fever disappeared in the U.S. But today, the ticks are back.

“People are allowing the populations to get larger and larger along the border,” Pound said.

The fever-carrying ticks prefer cattle as prey, but they’ll settle for deer and antelope when cattle are scarce. Deer with cattle infestations can cross over the Mexico border and spread ticks to disease-free areas in the U.S. Pound said that a tick infestation can wipeout 90 percent of never-before-exposed (or “naïve”) cattle.

“All of the cattle in the U.S. are naïve.” Pound said. “They have not seen this disease.”

Even if a tick population doesn’t carry cattle fever, infestations can still harm animals, Pound said. He’s seen cattle with tens of thousands of ticks on their bodies.

“In extreme situations, [cattle] can get to look very emaciated”

Pound said fever-carrying tick species are especially dangerous because of their rapid life cycles. Ticks latch onto cattle as larva and drop off as egg-laying adults in a process that takes only 18 days. In contrast, species of ticks that carry Lyme disease take two years to complete their life cycles. The rapid life cycle of fever-carrying ticks means tick populations can suddenly boom in areas without previous infections.

Fever-carrying ticks are still rare in south Texas, but their deadliness and ability to colonize areas quickly means that Pound and his fellow scientists have to find new ways to keep the ticks from spreading.

One way of stopping ticks is a pesticide-application system for deer. Pound worked with ARS scientists and the USDA Animal and Plant Health Inspection Service to set up special deer feeding stations that apply pesticide to the deer. The stations look like buckets with long paint-rollers sticking vertically from the corners. Deer reach down to get food and pesticide rolls onto their heads and necks.

“What we’re trying to do is bait them in to treat themselves,” Pound said.

The pesticide is an oily substance called permethrin. As the deer grooms itself, the pesticide combines with oils in the skin and hair and spreads over the deer’s body. It’s similar to how commercial flea treatments like Frontline work. In trials using lonestar ticks as models for fever-carrying ticks, Pound saw a 97 percent to 100 percent eradication of ticks after using the roller method.

“If you can treat the cattle, horses and deer, then you can eradicate the tick,” Pound said.

During certain times of year, the corn in the roller-feeders is mixed with an ingestible treatment called ivermectine. Ivermectine interferes with the mouthparts ticks use to suck blood. It doesn’t harm the deer, but ivermectine will keep ticks from feeding. Unfortunately, said Pound, ivermectine is not approved for use in food animals, so treatment has to stop in time for hunting season.

Pound isn’t the only USDA employee dedicated to stopping cattle fever. A group of about 60 cowboys, nicknamed “Tick Riders” have patrolled the Texas-Mexico border since 1906. Tick Riders look for cattle that have roamed from Mexico into Texas. That means at least one patrol a week along the Rio Grande.

Together, Tick Riders and Pound’s pesticide treatment have had success. Just last week, the Texas Animal Health Commission (TAHC) announced that 42,111 acres would be released from temporary fever-tick quarantine.

The TAHC and USDA will continue to work closely with local land owners to maintain an effective surveillance program to that fever ticks do not reoccur in the area,” said a TAHC spokesperson in a Nov. 3 press release.