Comparing agriculture of the past with today

If you ask your grandparents how they got their food, they might have a different answer than you think.  Why is this? It’s because agriculture has changed throughout history.

There are currently over 7.3 billion people in the world, with an expected population of over 8.5 billion by 2030 and 9.7 in 2050. That’s a lot of people to feed! How will we be able to provide safe, nutritious food to all these people? The answer: through changes and advances in the agricultural system.

Over 200 years ago, 90 percent of the U.S. population lived on farms and produced their own food to eat. But today, only two percent of the population produces food for the world to consume. That’s a large change in the amount of people associated with producing food and making sure that everyone has enough to eat.

Farmers use technology to make advances in producing more food for a growing world. Through the use of technology, each farmer is able to feed 155 people today, compared to 1940, when one farmer could feed only 19 people.  Farmers use technologies such as motorized equipment, modified housing for animals and biotechnology, which allow for improvement in agriculture. Better technology has allowed farmers to feed more people and requires fewer people to work on farms to feed their families. 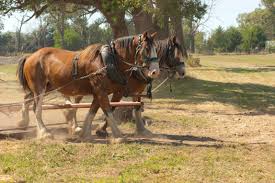 Changes in equipment have made a large impact on the way farmers are able to farm and grow food. In the past, farmers would have to do field work by hand or with horse-drawn equipment. This work would take a long time to complete, which meant that farms were smaller because farmers could only work so much land. Horses were not very fast, and since they were animals, they would get tired and need rest to recover from their hard work.

Today, most farmers use tractors and other motorized equipment to help with field work. Tractors, combines, plows, etc. are much larger and move much faster than horses, so farmers are able to produce more food in a shorter amount of time. These machines still need to be taken care of because they can break down just like a car, but they can run for longer periods of time and don’t need recovery periods.

The way in which farm animals are raised and where they live has changed as well. Through research with animals, scientists have discovered what types of housing make the animals the most comfortable. In today’s times, dairy cows typically live in barns that provide soft mattresses, sand beds or water beds.  There are also nutritionists to feed them special diets, and fans and sprinklers to keep them cool when it is hot outside.  Making the animals comfortable is important because farmers want their animals to be healthy, but also for the dairy cows to produce more milk yield.

Pigs are also now typically housed indoors.  Since the switch of housing pigs inside, the disease of Trichinosis has greatly decreased from the pig population in the United States.  This disease was common in wild boars, and could be transmitted to domestic pigs if they came in contact with wild boars.  When pigs were not held in confinement for housing, this was quite a bit more common than it is today. In the 1940s there were reported to be 400 cases of trichinosis in the United States, while in 2012 there were only 15 reported cases.

On top of the animal agricultural industry changing throughout the years, crop production has improved as well. Biotechnology in agriculture is the manipulation of a living organism to improve the quality of human life through advances in crop and animal production.  Seed technology has changed over the years through the help of both biotechnology and genetic engineering.  In the past, crop harvests have been destroyed due to harsh weather conditions, but now scientists can change crop outcomes by modifying seeds in the first place.

All along, farmers have been trying to make the most out of their resources, but with continuously improving technology, modern farmers have been able to partake in sustainable agriculture and farming practices such as conservation, preservation, and moderation.

One thing remains the same about agriculture today as it did centuries ago: majority of the farms in the United States are family owned, and the farmers are working hard to bring the most affordable and healthy food from their farm to your dinner plate.