One of the biggest topics of animal agriculture shown through the media focuses on the impacts animal production has on the environment. Each and every human has made an impact on the environment and the world in which we live, so it is no surprise this is the same case with animals.

Below are some common questions asked pertaining to the environmental impacts of the animal agriculture industry, and answers to those questions.

Each and every living creature produces greenhouse gases (GHG). Greenhouse gases are gases in the earth’s atmosphere and can be produced in nature and through human industry. An increased amount of GHG generates high temperatures on earth. The most abundant GHG are carbon dioxide, methane, nitrous oxide and fluorinated gases.

The amount of greenhouse gases that agriculture and farming produce varies around the world. This is because each livestock production system utilizes its resources differently. Agricultural systems are often categorized into two types of  systems: extensive farming and intensive farming.

Extensive farming is a type of agriculture that is mainly a pasture-based and land-based system. Extensive farming uses low labor and input resources.  This type of farming utilizes natural resources and results in lower yield per unit of land than intensive farming. In beef cattle production, for example, cattle in an extensive system would graze in a pasture.

Intensive systems have more concentrated operations and are often more mechanized. This system uses higher amounts of labor and resources per unit of land, but it also produces greater yield per unit of land than extensive farming systems.  A feedlot is an example of an intensive system for beef cattle production. 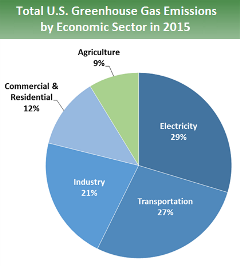 Each of these systems occurs all around the world and each has an environmental impact. The challenge for global livestock production is to improve environmental sustainability and continue to reduce greenhouse gases.  Currently in the United States, agriculture accounts for nine percent of the total greenhouse gases emitted.

The largest methane (CH4) source emitter in the world is from livestock and manure emissions combined. Most of this methane is a result of manure storage and enteric fermentation, which is methane produced in the digestive tract of an animal.  Some farmers in California are utilizing an invention called the methane digester to have the methane be used as another source of energy.  Read about this cool sustainable work here!

Farmers are now using a process called Precision Feed Management which allows the farmer to feed his animals a more precise amount of nutrients so there is greater feed use and less waste in the form of uneaten food and animal manure. When animals are better able to use the food they eat, fewer nutrients are released into the environment.

What’s with the manure? 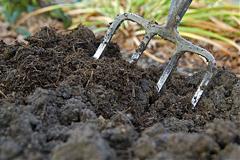 If you’ve ever been to a farm, you might have noticed that some of the smells take some getting used to. One smell is manure, or animal waste, which contributes to the farm’s environmental impact. As indicated above, manure can be a large source of GHG especially from methane and nitrous oxide. Farmers have different ways of dealing with manure and the odor that comes from these wastes.

How do farmers minimize the impact?

A term you might hear when talking about climate change is carbon footprint. A carbon footprint is the amount of carbon that each person uses and emits into the atmosphere. People are often encouraged to lower their carbon footprint by recycling or walking instead of driving.  We all have a responsibility to the earth to keep it clean and use fewer resources. By improving its efficiency, the livestock industry can work to reduce carbon emissions and conserve resources.