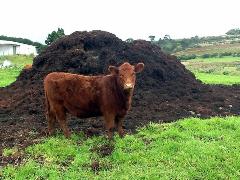 Animals are not and will never be 100 percent efficient at utilizing their feed for maintenance and growth with zero excretion, nor should we expect them to be, since humans are far less efficient. Therefore, no matter what we feed animals, there will be manure produced. This is often referred to as “waste” in the popular press, but in fact, animal manure is a valuable fertilizer.

When farmers harvest their crops, nutrients are removed from the soil.  The nutrients in the soil were used to help the crop grow and develop, so when the crop is removed from the ground, the soil is stripped of its nutrients.  These nutrients need to be replaced in order to have successful crops for the next year.  Usually the nutrients are replaced with commercial fertilizer, but manure is another form of nutrient replacement for soil as it is organic and also a way to utilize waste.

While there are benefits of using animal manure as a fertilizer, there have also been many concerns with manure and the effects it has on the environment.  Animal manure must be managed properly, as if it is over-applied, nutrients can build-up in the soil and potentially enter waterways via leaching or erosion events. 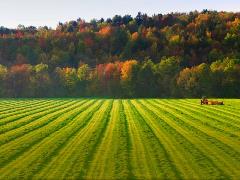 Leaching refers to a nutrient's ability to move downward through the soil. This occurs primarily with nutrients that loosely adhere to soil particles. Nitrogen (N) is a good example of this. Over time, nitrogen will leach through the soil and can enter into waterways.

Erosion occurs when soil is physically displaced by water or occasionally by wind. We often think of erosion taking place along the coast or in fast moving rivers, but erosion can happen on a farm when rain is plenty.  Erosion on farms is usually due to barren fields, with no crops planted since there are no root systems to hold the soil in place. The more tillage a farmer does, the more likely the topsoil will become eroded.  When the soil is eroded it has the potential to enter into waterways.  Phosphorus (P) is a good example of potential nutrient loss due to soil erosion.  Phosphorus fairly tightly adheres to soil particles and therefore does not move through the soil (the way Nitrogen does by leaching), but it can be lost in an event of erosion.

Why do we want to avoid nutrients from entering waterways of the U.S.?

The best, publicized reason for the detrimental effects of excess nutrients in waterways of the United States is algae blooms, which lead to eutrophication. Algae, just like any other living organism, needs certain nutrients to survive and grow. One of the major nutrients needed for growth of algae is phosphorus (P). If excess phosphorus is supplied in the water, the algae grow at a rapid rate. This results in two major problems. First, as the algae grow, they block out the sunlight, which can result in the death of sub-aquatic vegetation. Sub-aquatic vegetation helps replenish dissolved oxygen concentrations in the water. This problem might be somewhat offset by the fact that algae also produce oxygen, but algae also die at a rapid rate. As they do, they are decomposed by bacteria, which uses a large amount of oxygen. This results in reductions in dissolved oxygen concentrations in the water, which in severe cases can result in the death of larger aquatic organisms like fish. This problem was best illustrated in the 1960s and 1970s when phosphates were used in laundry detergents and more recently where phosphates in dishwasher detergents have been linked to massive algae blooms.

Can threats be minimized or avoided?

Realistically, no threat can be completely avoided, but they can certainly be minimized. In the U.S., there are now national standards that regulate the amount of N and P from animal manure, which can be applied to cropland based on soil type, nutrient profile and crop nutrient removal rates. Many individual states have used these national standards as a baseline and have opted for more stringent regulations. 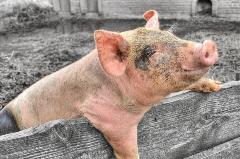 While regulations are one way to enforce compliance with environmental standards, perhaps more exciting are the changes that animal producers have put in place on their own to alter nutrient excretion profiles and minimize any potential environmental threat. One of the major problems with swine manure and poultry excreta was that the concentrations of nitrogen and phosphorus were not in the correct ratio, relative to the needs of most crops.  Therefore, if swine manure was applied to a field of Bermuda grass hay to meet the nitrogen needs, approximately three to four times the P requirement was applied, which resulted in phosphorus accumulation in the soil over time.

Another contributing factor in the imbalance of N and P in animal manure arises from the fact that N in manure has the ability to volatilize to ammonia and be lost from the soil. This is particularly true if the manure is applied on top of the soil.  Topical application use to be the primary mode of application. If the soil was rapidly tilled after application, than a majority of the N would be retained in the soil and would be available to the plant. However, if it were allowed to sit, virtually all of the N would be lost as ammonia within a week. Therefore, much research has been done investigating subsurface application of manure, and best practices now include injection of animal manure under the soil, preventing ammonia volatilization.