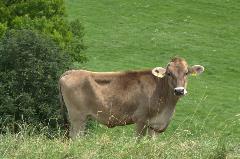 Why are growth promotants used in animal production?

Implants are administered through a small pellet that is placed under the skin on the back of an animal’s ear, but some can be given through the animals’ feed. Implants have been given to beef cattle to increase feed efficiency and daily gains, the amount of weight gained by the animal each day. Feed efficiency is the ability of an animal to better use the nutrients in the feed for growth.

How do implants work?

Animal growth is mainly regulated by a part of the brain called the pituitary gland and its secretions of growth hormone. Implants work by increasing (via the pituitary gland) the amount of growth hormone and insulin in the animal’s cells, which allows the animal to grow more muscle and deposit less fat from the food it eats. This causes a measurable increase in growth rate and improved feed efficiency. Implants don’t guarantee that animals will automatically grow; farmers must still provide the animal with good nutrition.

Ractopamine is a feed additive that helps to improve weight gain, improve feed efficiency, and increase leanness in pigs and cattle. Leanness means that the animal does not have a large amount of fat in its body. By improving feed efficiency, animals are better able to use food to grow and increase in weight. This means that it takes less time for the animal to reach market weight for slaughter.

Somatotropin (ST), also known as growth hormone, is a natural protein hormone that is produced by the pituitary gland, which is part of the brain. In dairy cows, bovine somatotropin (bST) is a major regulator of milk production.  Recombinant bovine somatotropin (rbST) is a man-made version of bST. rbST is given to cows by a shot and helps to increase the amount of milk a cow produces. There is no difference between milk that is organic, labeled as rbST free or from cows that received rbST. There is no FDA-approved test that can tell the difference between milk from cows given rbST and those not given rbST.

Ionophores (monesin, lasalocid, laidlomycin, salinomycin, narasin) are antimicrobial compounds that are commonly fed to ruminant animals to improve feed efficiency. Antimicrobials target the bacteria that live in the animals’ stomachs and alter the bacteria so feed can be better digested. Rumensin is the brand name of monesin and increases milk production efficiency (more milk per pound of feed). Inophores are also used for beef cattle to help increase weight gain and decrease the time it takes to reach market weight.