One of the most common farm animals around the world is the cow. Every continent except for Antarctica raises at least one breed of cattle. It’s easy to see why: cows provide meat, milk, labor, leather and hundreds of other products that people use in everyday life.

Domesticated cows are descended from wild aurochs, a species of wild cattle with long horns that are now extinct. They were domesticated between 5,000 and 10,000 years ago for similar reasons as we use them today — meat, milk and help with labor. Horses later filled the role for labor, as they were able to perform the jobs more quickly.

Today, there are many different breeds of cattle, which can live in different climates. For example, in Indonesia, which is a chain of islands, each island where people live has its own breed of cattle. However, cattle eat and drink so much that the dry eastern Indonesia can’t raise too many cows.

Farmers need to make sure they have a lot of water and food for their cows because cows eat and drink a lot. On average, a cow will eat about 25 pounds of food and drink about 30 gallons of water in a single day.

Don’t try that at home.

Cattle today are raised by both small and large-scale farms, where they are fed hay, grain, or food byproducts like tomato pulp, potato peels, or hulls from almonds or soy. Most cows are raised for either beef or milk.

Cows have different stomachs than humans; while people have a stomach that is just a single compartment, cows have multiple compartments that are better at digesting rough plants. Animals with these kinds of stomachs are called ruminants. Other ruminants include goats and sheep. 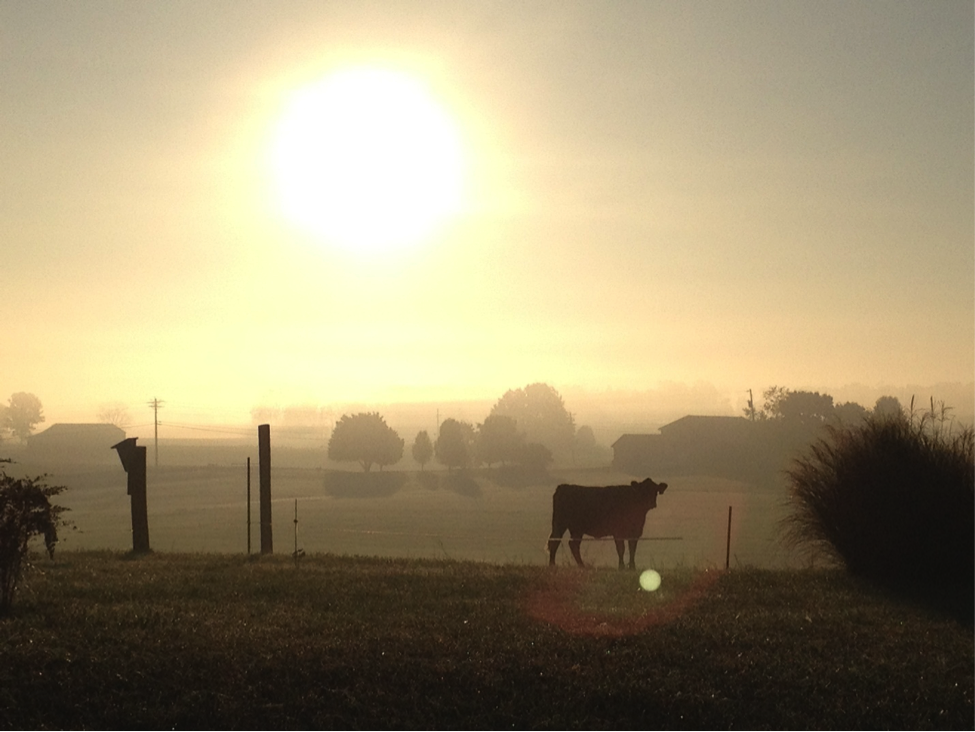 The beef cow plays a vital role in animal production across the world. The beef cattle industry is a strong industry that focuses on raising a safe and quality product for both its producers and consumers. The beef cow, a ruminant animal, provides a high quality protein source for human consumption via forages and other byproducts that non-ruminant animals do not consume. Since not all land is able to be put into crop production, beef cattle production is an adequate substitution because the cattle can convert the grasses and forages into quality beef products.

What do beef cattle eat?

The ingredients that go into livestock feed are called feedstuffs. The feedstuffs cattle consume consist of roughages, grains, oilseeds and byproducts.

Roughages are coarse, indigestible ingredients that provide bulk to the diet and promote normal bowel functions. In the human diet, foods like lettuce and grains provide the roughage we need to stay healthy. In the beef cattle diet, common roughages include hay, silage and grass. Silage is a crop that has been preserved in a moist, succulent condition by partial fermentation in a tight container (silo) above or below ground. The majority of the food cattle eat comes from this type of feedstuffs.

Roughages are mainly filler in the cattle’s diet. They are high in fiber but relatively low in energy.

Grains are high in energy but low in fiber. Common grains fed to cattle are corn, milo, barley and oats. Milo is a drought-resistant type of grain. Much less grain is needed in the cattle’s diet than roughage is. This is because grains fill cattle energy needs more than it fills their stomachs.

Cattle are fed more grain the older they get. They gain weight faster when they are on higher amounts of grain. This is how cattle are finished off before they go to market.

Many co-products used for cattle feed are leftover ingredients from food production for humans.

Cattle have a very diverse diet. Cattle eat a variety of feeds that provide them with different nutrients.