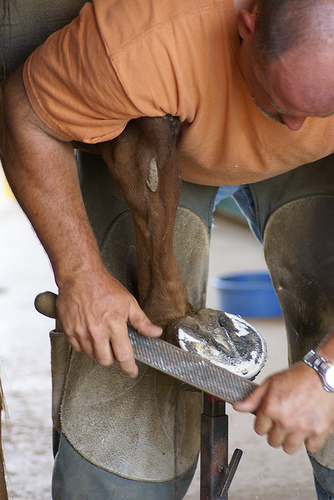 A farrier uses a rasp to level the hoof

Horses were also used for transportation because they were capable of moving much further than humans at a much faster pace. Before horses, travel was limited to how far a person was willing and able to walk; with horses, people became able to travel over land at a faster pace. When food was scarce, horses were able to serve as a source of meat for the weary travelers.

Horses are known as somewhat picky eaters, but they will eat grasses, hay and some grains. One of the downsides of allowing horses free reign over a pasture is that they graze over very large areas, using up an entire pasture in a relatively short period of time. Farmers who allow their horses out to pasture will usually rotate the horses through different sections in order to allow the grass to grow back.

Though people living in rural or underdeveloped areas still use horses for manual labor and transportation, industrialized countries have mostly replaced horses with cars and tractors. In the United States, horses are usually raised as pets, companions and athletes for horse races.

Equine-assisted therapy, hippotherapy and therapeutic riding are all terms for a process where horses are used as therapy animals.

Therapeutic riding was developed in the 1950s in Europe as a tool for improving the lives of individuals with physical disabilities. The North American Riding for the Handicapped Association (NARHA) was founded in 1969 to promote and support therapeutic riding in the United States and Canada.

Individuals with almost any kind of disability, whether temporary or permanent, can benefit from therapeutic riding. Research conducted by the American Hippotherapy Association has proven that the multidimensional movements of the horse provide a disabled rider with "the opportunity to explore, control and coordinate posture and movement."

There are many physical and psychological benefits in the practice. Horseback riding gently and rhythmically moves the rider's body in a manner similar to a human gait. Riders with physical disabilities often show improvement in flexibility, balance and muscle strength.

There are also positive psychological benefits to therapeutic riding. A riding arena can be a nice break from a doctor’s office or physical therapy center. Many people, whether in therapy or not, also benefit from the process of learning to guide and control a horse.

Major third party payers throughout the country reimburse for treatment that includes the movement of the horse as a treatment tool. Continuing Education Units (CEU's) are routinely granted for AHA approved and other courses taught by clinicians with recognized expertise in hippotherapy.

Horse hoof trimming is a major task involved with managing horses. Improper management of a horse’s hooves can lead to lameness. Lameness is a disability of the leg or foot that makes movement difficult. Trimming helps prevent lameness and injury of the horse.

One tool farriers normally own for trimming is chaps. Chaps are leather leggings that cover the front of the legs. They are used to protect the farrier’s legs. Farriers need protection from the sharp tools used if the horse pulls their hoof away. Chaps also help the farrier grip the horse’s leg between their legs.

Farriers also own a hoof pick. A hoof pick is a pointed and curved instrument. It is used to remove dirt and stones from the bottom of the horse’s hoof. Removing the dirt allows the farrier to better see what needs to be trimmed. Other sharp tools can also be dulled by dirt.

Another tool owned by a farrier is a hoof knife. A hoof knife is a handle with a curved blade with its tip bent back. It is used to take off dried sole tissue on the bottom of the hoof. The sole is the bottom surface of the hoof that touches the ground.

Nippers is a main tool farriers will have to own. A nippers is the tool used to trim the excess growth of the hoof. They act in the same way a fingernail clippers works for people. This is the main tool a farrier must own for trimming.

A rasp is another tool normally owned by farriers. A rasp is a flat, metal bar that has sharp projections on it. The rasp acts like a file to remove small amounts of material at one time. It is used to shape the hoof and remove sharp points made from the nippers.

One of the last tools a farrier may own for trimming is gloves. The gloves are normally made of leather and may have rubber on the finger tips. The gloves help the farrier grip the tools. They also protect his hands from injury from the sharp tools used.

The tools listed above are some of the tools a farrier may own. The listed tools are used for trimming a horse’s hoof. The farrier can also put metal shoes on a horse. Shoeing requires another set of tools along with the trimming tools to be completed.

What should I feed my horse?

Horses are nonruminant animals, meaning they have a simple, one-chamber, stomach similar to humans, dogs and pigs. However, their diets are very different. Horses are able to obtain nutrients from ingredients that most other nonruminants can't because they have a very well developed cecum, and they have more capacity for nutrient absorption in the large intestine than many other animals. The cecum is a blind pouch that sits between the small intestine and large intestine, and serves as a large fermentation vat. This means that the cecum contains millions of bacteria and other microorganisms that are able to breakdown feed ingredients that the animal can't on its own. For example, cellulose, which is a structural component in grass and hay, can't be broken down by enzymes produced by the horse, but can be utilized by microorganisms in the cecum, which in turn produced volatile fatty acids (VFAs) that can be used as an energy source by the horse. Ruminant animals, like sheep and cattle, also have large fermentation vats, but in the case of ruminant animals this occurs on the from end of the digestive tract, shortly after absorption.

In the case of the horse, fermentation occurs much further down the digestive tract. As a result, the process is somewhat less effective than in ruminants, but the horse has partially compensated by having increased absorptive capacity for nutrients in the large intestine. With most species, we assume that almost all absorption occurs in the small intestine. This is not true for the horse. Deciding what to feed your horse can be complex because horses come in all sorts of breeds, sizes, live in different climates, have widely different expectations in terms of work, and may or may not have access to pasture. Therefore, prior to making a decision on what to feed your horse, it is important to have an understanding of how horses consume and digest feed.

Below are a series of videos which attempt to provide detail on these issues. The first is a very nice 3D animation of the horse gastrointestinal tract put together by PurinaMills and available through their YouTube channel. The second is a video put together by a group of undergraduates at Purdue University and walk through the anatomy and physiology of an actually equine GI tract.

This video is a nice 3D view and discussion of digestion in the horse, and was put together by Purina Mills and posted to their YouTube channel.

This video explains the anatomy and physiology of an actual equine digestive tract. It was put together by a group of undergraduates at Purdue University as part of their undergraduate nutrition course.

Racehorses have been a source of entertainment for people for hundreds of years. There are many people that are involved to prepare horses for successful careers. Several things are done before and after race day to help the horse perform to their highest potential.

A horse trainer is a person licensed by the state to train horses. Several things can be done to help the horse, like ice and heat therapy. Horses also prosper under a daily routine and feeding schedule.

Just like athletes, ice and heat therapy help horses ease their aches and pains. Putting a horse’s legs in an ice bath every day helps with joint and ligament inflammation (heat and swelling). Infrared blankets help the horse by increasing blood flow to the sore area and decreasing aches. Infrared blankets are a type of heat therapy trainers use to soothe soreness.

Horses also benefit from a daily routine. They are exercised in some way every day in preparation for their next race. The grooms feed the horses around the same time each day to stay in routine. Grooms are the people that take care of the horses’ daily needs.

The work is not done as soon as the race is over. The groom must take care of the horse after the race and make sure everything is normal. You want the horse to be just as sound coming out of the race as they were when they went into it. Soundness refers to being free from injury and having good overall health.

After the race is over, the horse returns to the barn to be "cooled out." The phrase “cooled out” refers to walking the horse until their heart rate returns to normal. After the horse has been cooled out they can go back in their stall. A stall is where the horse is kept when not exercising or racing.

The horse will drink water while being cooled out. However, hay and grain must be kept from the horse for an extended period of time after racing. Eating hay too soon after the race can lead to choking. Eating grain while still hot from running can lead to founder. Founder is a condition where the hooves get hot and are extremely painful. Poultice is placed on the horse’s legs after they are in their stall. Poultice refers to a clay mixture that helps the horse’s legs recover faster from running hard. After racing, the horse will usually get a couple of days off to recover. Once those days have passed, preparation for the next race begins.

The amount of work and preparation that goes into race day is all in hopes of winning a race. Most horse trainers on the backside  rely on their horses for their livelihood. The backside is where the barns and facilities are for the horses that run. Proper care of the horses ensures that they have an optimum performance on race day.

Horses have the ability to run upwards of 35 mph, with strides in some cases exceeding 30 feet. They can also jump extremely high, with fences in the elite jumper shows exceeding 6 feet in height with massive spreads. All of this balanced on four, relatively small feet. The horse's skeleton supports the horse through its many athletic endeavors. Below is a video providing an overview of the equine skeletal system.