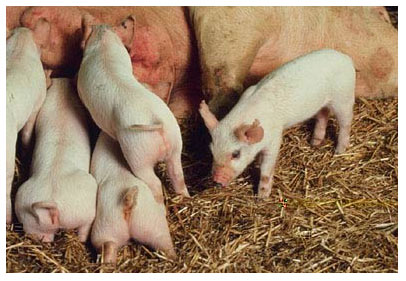 Male pigs are normally castrated between 4 and 14 days old. Photo from the Animal Science Image Gallery

Despite their dirty reputation, pork is still one of the more popular forms of meat. Pigs were domesticated from the wild boar between 7,000 and 9,000 years ago in the Middle East and the eastern Mediterranean; it is also possible that boars were also independently domesticated in China.

Ironically, despite their history in the Middle East, pork is forbidden in Judaism, Islam and some orthodox Christian sects. Many Buddhists and Hindus also do not eat pork, though this is due more to their vegetarianism rather than a particular doctrine against pork.

Pigs are not picky eaters and are thus fed a wide range of foods. They are often fed surplus crops and food byproducts that humans don’t or can’t eat. Pigs are raised both by individuals and on an industrial scale, and their housing depends upon the climate of the region. In warmer locales, they can usually be outside all year long; in the cold climate of the United Kingdom, they are often housed in specialized indoor pig farms during the winter.

People rarely think of pigs being used for any other purpose other than their meat, but pigs sometimes have secondary jobs. In France, some pigs are trained to find black truffles, a delicious yet notoriously difficult delicacy to find. Some rural societies have “garbage pigs,” which scavenge the scraps of the town. This scavenging cleans up the town and allows them to later slaughter and use the pig’s meat with minimal investment in feed.  In addition, pig parts are used to make all sort of things.  Pig heart valves are even used as replacement for failing heart valves in humans.  For more information on the many products that come from pigs, click here.

Like people, pigs can carry diseases and illnesses that are very harmful to their health. Below is information on some of the diseases that can affect pigs. Click here for information on other pig diseases.

Classical swine fever is caused by a virus. A virus is a very small organism that is smaller than a bacterium and cannot grow or reproduce without a living organism. Pigs that are infected with this might show a loss in appetite or a fever. Other symptoms include diarrhea or discoloration of the skin.

Aujeszky’s disease is caused by a herpesvirus and signs may vary depending on the age of the animal. Symptoms include nervous and respiratory system problems, abortions and stillbirths in pregnant females. Deaths from this disease are higher among younger pigs.

If any of the above diseases are suspected in a herd, the pig producer should notify a veterinarian.

Learn about other diseases that can affect pigs

Q. Why are male swine castrated?

There are two reasons to castrate a male pig: behavior and meat quality.

Uncastrated male pigs, called boars, are known for aggression. Boars will bite, shove and jump on other pigs. Boars can also be hard for workers to handle, and boar aggression can be a risk to worker safety. Castrating a male pig will reduce these behaviors.

Some boars also produce “boar taint” or “off odors.” Boar taint does not affect food safety, but it does change how meat tastes and smells. Some describe it as a “musk” or a smell similar to onions or manure. The USDA Food Safety and Inspection Service does not allow meat with a boar taint smell to enter the human food supply.

Boar taint is associated with the hormones produced naturally in uncastrated male pigs. Scientists think the odor evolved to attract female pigs. Castrated male pigs, called barrows, do not have testicles, so they cannot produce these sex hormones.

Q. How are swine castrated?

The castration process has many steps and should only be done by a person with training and experience with pigs. Male pigs are castrated using a disinfected surgical knife. A trained worker or veterinarian holds the pig and makes an incision above each testicle. The testicle is pushed through the scrotal sac. The person doing the procedure is careful to break the testicular cords properly. It is important not to cause a hernia in the pig. The wound is then sprayed with an antiseptic.

Q. When are swine castrated?

According to the American Veterinary Medical Association (AVMA), male pigs should be castrated by 14 days of age. Most pig producers castrated their pigs between day four and 14 of age. If a producer waits longer than 14 days, AVMA recommends that pigs be castrated at least five days before weaning.

Castrating very young pigs is important for several reasons. Young pigs are nursing from a sow, and they get antibodies from the sow’s milk that help them heal and fight infection. Young pigs are also small enough that one person can safely perform the procedure. Studies have also shown that younger pigs show fewer signs of pain during castration.

Q. What methods can reduce pain?

Some pig producers use anesthesia or analgesics to reduce pain from castration. According to the USDA Agricultural Research Service, a painkiller called Lidocaine is the most common analgesic used with swine. Though anesthesia may be used in some laboratory procedures, it is not common in modern swine production.

Though analgesics and anesthesia are not officially approved in the U.S. for use in swine castration, they can be prescribed as an “extra label use” by a veterinarian.

Many pig producers do not use analgesics and anesthesia. These painkillers can be costly, and some are not practical to use in a commercial setting. AVMA does recommend that pigs castrated after 14 days of age be given anesthesia or analgesics. Research shows that pigs’ sensitivity to pain might increase over time.

Q. Are there alternatives to castration?

In the United States, nearly 100 percent of male pigs are castrated. However, some countries handle castration differently. One alternative is to harvest male pigs at a younger age. Boar taint does not usually affect meat until the boar nears sexual maturity. The drawback to this system is that the pigs are smaller when they are harvested, so more pigs are needed to get the same amount of meat. If a pig is harvested at the lighter weight of 230 lb, compared with the more weight weight of 269 lb, a producer will need to raise 15 percent more pigs to produce the same amount of meat.

“Extralabel Drug Use and AMDUCA (FAQ)” from AVMA